A reminder to anyone who hasn't seen it yet that we are showcasing the personal work of Leach production potter, Britta Wengeler in the shop until the end of August.  Britta Wengeler, who is from Germany, has been making our tableware since 2012 and is currently on maternity leave from the studio.

After finishing her training in Germany 2009, she travelled for three years through France, Germany, New Zealand and England to learn more about different techniques and cultural aspects of ceramics. Especially, her time with New Zealand potter Petra Meyboden and her time in France had a strong influence on her work.

Britta loves cooking and the simple things of daily living. It is important to her that she produces work that is beautiful and a pleasure to use. Britta therefore produces a range of table and kitchen ware that is functional yet playful, while being rooted within the formal language of traditional European pottery. The pots are all produced at the Leach Pottery, decorated with stamps and glazes then fired under reduction in a gas kiln to 1300°C. 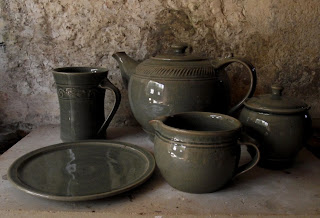